The SharePoint flaw first exploited in the wild in May continues to be exploited nine months after it was patched by Microsoft.

On December 10, security researcher Kevin Beaumont published a tweet cautioning organizations to patch a Microsoft SharePoint flaw that’s been actively exploited in the wild since at least May, and has since remained a valuable asset to cybercriminals.

A reminder that all organisations should be patching SharePoint vulnerability CVE-2019-0604 (from February) as significant numbers of assets remain exposed, and the vulnerability is actively exploited in the wild.

CVE-2019-0604 is a remote code execution (RCE) vulnerability in Microsoft SharePoint due to improper input validation in checking the source markup of an application package. Successful exploitation of the vulnerability by an attacker would grant them arbitrary code execution “in the context of the SharePoint application pool and the SharePoint server farm account.” The vulnerability was reported by security researcher Markus Wulftange, who shared a detailed write-up on his discovery in a blog for the Zero Day Initiative on March 13.

On May 9, security researcher Chris Doman published a tweet stating the flaw was being exploited in the wild based on reports from the National Cyber Security Centre in Saudi Arabia and the Canadian Centre for Cyber Security.

On May 28, Palo Alto Networks published a blog identifying the use of this vulnerability in the wild in targeted attacks by a threat actor known as Emissary Panda.

On November 25, Beaumont modified his BlueKeep honeypots, “BluePot,” to support SharePoint. One day later, Beaumont confirmed “the attackers arrived.” He reiterated the CVSS score for the vulnerability was wrong and should be a 9.8 because “it works without authentication.” He issued an additional reminder on December 10 because the flaw is still being exploited in the wild and a “significant numbers of assets remain exposed.”

In September, security analyst Mansour Al-Saeedi published his analysis of the vulnerability based on the initial work by the Zero Day Initiative, demoing a quick PoC. Al-Saeedi also published a packet capture analysis of the RCE exploit being carried out along with Snort and Sigma rules to detect it to his GitHub repository.

Microsoft initially patched the vulnerability on February 12 during Patch Tuesday. However, that patch was apparently incomplete, as Microsoft issued a follow-up release on March 12 to “comprehensively address” the flaw. 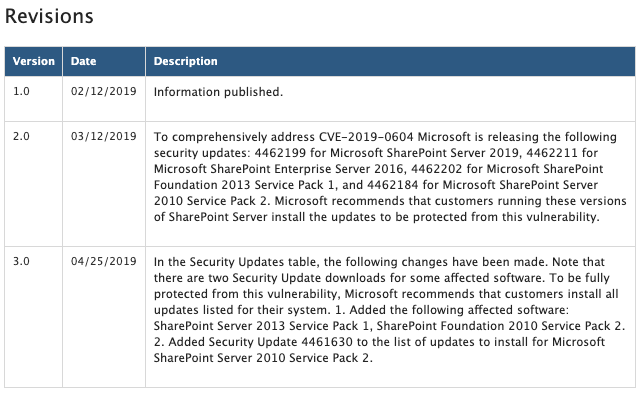 A list of Tenable plugins to identify this vulnerability can be found here.

Citrix publishes an advisory to address multiple flaws in its ADC and Gateway products, including a critical vulnerability.